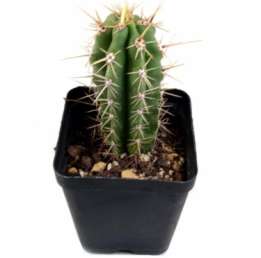 (Echinopsis pachanoi)
San Pedro is the sacred cactus from Ecuador and Peru. This is a cutting, which you can grow larger. Once it has taken root, it will grow very fast. In fact it’s one of the fastest growing cacti in the world.

Everything you need to know about San Pedro!

Effects
It may take a while before the effects of the San Pedro cactus can be noticed, but once the trip starts it could be one of the most beautiful and divine experiences you will ever have.
The effects of mescaline are somewhat similar to those brought about by other psychedelics like Psilocybe cubensis mushrooms, DMT containing plants or synthetic hallucinogens like LSD-25. The San Pedro trip is less stronger than the Peyote trip, but so is the initial nausea. A trip can last six to twelve hours.
The so-called hangover of a cactus experience comes before the actual trip starts. Cramps, vomiting and crying (tears flowing from the eyes without feeling sad) are possible symptoms. Most of these disappear within one hour after the trip has started.
Medical use
Traditionally it has been used as an analgesic, against toothache, rheumatism, asthma and the cold.
In psychotherapy, under medical prescription, San Pedro has been used for the treatment of the neurasthenia. In the same way it has also been used in cardiology. Research has shown that it has powerful antibacterial properties, being able to eliminate bacteria that were resistant to penicillin.
Usage
The most common way to take San Pedro is chewing the cactus (fresh or dried), until all mescaline has entered the body through the mucous membranes. But this is very distasteful. A way to reduce the bitterness is drinking pineapple juice during the chewing, but it will still remain quite unpleasant. Best is not to eat approximately six hours before you start eating this cactus. You might feel a little nausea before the trip begins. Some people say this can be avoided by eating ginger or smoking cannabis.

You can also make tea of the San Pedro cacti by cooking them in water and adding some herbs, like the ones shamans use with San Pedro: micha (Brugmansia suavenolens) and cimorillo (Coleus blumei).
It’s advisable to spread the dosage over the period of an hour, to make the initial reaction of the body less intense.
The effects of mescaline are noticeable when 100 mg is taken, but for a heavy trip 350 mg is needed. The other compounds react with mescaline and with each other. The total experience will take six to twelve hours, and depends on the person’s level of sensitivity and the dose.

It is difficult to indicate how much mescaline one San Pedro cactus contains, as this depends on its age and growing conditions. The bigger and older a cactus, the more mescaline it will contain. An average mescaline dosage is about 7-14 centimeters
Remember that potency can vary greatly. Therefore it is best not to take the dosage all at once, but to build it up gradually: take half of the dosage, wait 60 to 90 minutes to see what the effect is, then if desired take half of what is left over and if necessary repeat. A San Pedro trip takes about two to two and a half hours to reach its peak.
Mescaline dosages
150 mg     Minimumdosis.
150 – 300 mg     light to moderate dosage
300 – 400 mg     strong trip last 6 – 12 hours
450 – 500 mg     possible ego dissolution, trip will last about 12 hours
500 – 600 mg     definite ego dissolution, trip can last up to 24 hours
Warnings
Make sure you always have an experienced but sober person with you, for support and safety!
Don’t drive a car or other vehicles when you’re under the influence of psychedelics. Only take San Pedro when you’re in a safe and familiar environment. Never trip by yourself. When things go wrong Seresta or Valium can help to bring fears down to an ‘easy to handle’ level.