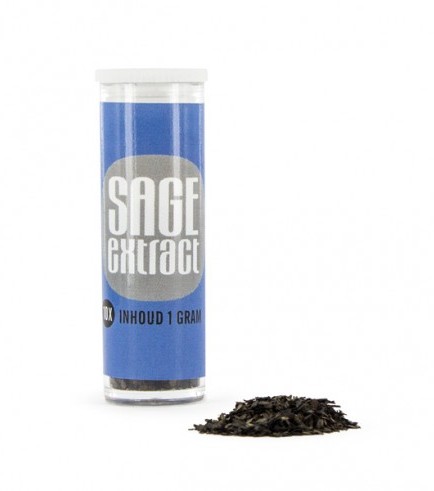 This standardized Salvia divinorum extract is ten times more concentrated than the dried leaves. The effects of an extract are much shorter in duration, about ten minutes rather than two hours, but also way stronger.

Everything you need to know about Salvia extract 10x!

After ingestion the effects will be noticeable within mere seconds. This instant change of awareness may feel like an out-of-body experience or transportation to a bizarre alien world. One may also have a sense of merging with objects like the couch one is sitting on.
Our Salvia is imported from Oaxaca, Mexico. Extracts come in a reclosable plastic tube.

More info about Salvia in general, usage and warnings:
Salvia Divinorum is a plant with soft leaves, which originates in Mexico and contains the powerful psychoactive substance salvinorin. In Mexico, Salvia divinorum was originally used in healing and divination, and has become available in the psychedelic underground culture in the early 1990s. There are many types and variations within the plant species Salvia, including the sage used in the kitchen; however, plants from the garden center are hardly ever Salvia divinorum unless stated on the label.
Just smoking the leaves will make it difficult to generate strong psychoactive effects, but extracts and specially grown leaves of higher potency can create special, all-encompassing mind states.
History
Salvia divinorum is a psychoactive plant and belongs to the Labitae family (also called the ‘mint’ family). As far as is known, the plant is only native to the Mazatec area in the Sierra Madre mountains in Oaxaca, Mexico, also known as Sierra Mazateca (Ott 1996). Some Mazatec curanderos and curanderas (medicine men and women, also often called shamans) use Salvia divinorum as a tool to make predictions in healing rituals. The species name of the plant, divinorum, according to many means ‘of the seer’ and refers to the traditional use: providing insight into the cause or identification of diseases by means of rituals.
Salvia divinorum was first recorded in Western literature in 1939 by Jean Basset Johnston who was researching the use of psilocybin mushrooms in Mexico among the Mazatecs. R. Gordon Wasson went on to record its use between 1951 and 1962 and confirmed its psychoactive effect after using Salvia himself. The use of Salvia dates back to the early history of Central America, but little has been written about it. Salvia remained a more or less obscure mind-blowing agent until the mid-1990s Daniel Siebert and others began experimenting, documenting, and selling over the Internet.
Salvia divinorum has a unique effect that is difficult to accurately describe, especially when compared to the effects of other psychoactive plants or drugs. The effects vary, depending on the dosage and manner of consumption, from very mild at lower doses to overwhelmingly strong at higher doses. While the effects of Salvia divinorum are often grouped together with those of other visual psychoactive agents such as smoked DMT, the effects are so radically different that such comparisons often lead to misunderstandings. The following effects have been reported:
Loss of body coordination
Laugh uncontrollably
Change of visual perception or visions
Perception of multiple realities
A contemplative sense of peace / tranquility
Feeling of deep understanding
A dreamlike haze that covers everything
Feeling of total confusion or anger
Seeing or being part of a tunnel
Loss of consciousness as an individual
Experiencing an unreal geometry
Feeling of flying, hovering or spinning
The feeling of being absorbed into an energy field
The feeling of being connected to a greater ‘whole’
The feeling of being underground or underwater
The ability to travel to other places and times
To be able to assume the shape of non-living objects (the wall, a chair)
Seeing patterns that take the shape of a tunnel, tube, hose, or worm

The duration of the effects depends on the method of consumption and the amount ingested. Effects can last anywhere from fifteen minutes to three hours. In general, Salvia gives the fastest effect when smoked. The peak then lasts between five and twenty minutes, after which the effects diminish again. Taking it orally or via the oral mucosa requires more time for the active substances to work, but the effects last longer. Although there is a small group of people who have described effects that lasted more than four hours, the majority disappear within two hours.
Medical use
The traditional use of Salvia by the Mazatec Indians, as described in articles by Valdés et al., Includes both medical use and the more famous ‘spiritual’ use. In Valdés et al. 1983, the authors come up with the following medical applications:
-It helps purify the body and allows for urination. It stops diarrhea (the plant is believed to regulate the body’s excretory functions).
-It is given to the sick and the elderly to revitalize or reduce illness. People who look so pale that they are almost ready for death (anemia) can recover with the help of Salvia.
-It can be taken to relieve headaches and rheumatism (however, when taken in high doses for visions, a mild headache often lingers the next morning).
-There is a semi-magical disease known as panzon de barrego (sic), or swollen belly, which is believed to be caused by a brujo curse: an evil wizard. The victim’s abdomen swells as a result of a ‘stone’ placed inside him. Taking salvia removes this ‘stone’ and the belly shrinks back to its original size. Investigators met an old shaman who showed them his flaccid, crumpled stomach and how he cured himself of the ‘disease’ with the help of ‘la María’. Don Alejandro confirmed the ‘illness’ and the ‘cure’.
Salvia divinorum may be used as an aid to underground psychotherapy methods after more research. It is also possible that the discovery of affinity with the kappa-opioid receptor leads to valuable use in other medical fields. At present, no accepted medical method of use is known in the West.
Variations
Use
Salvia concentrate Many people have trouble getting the full effect by smoking only the dried leaves. Those who do manage to do this by taking a few hefty pulls from a pipe or bong. In general, the bong is considered the best tool for consuming Salvia, because it burns a large amount of leaves at the same time and the smoke quickly reaches the user. Smoking a joint of Salvia leaves in a less effective method: it requires a lot of leaves. It is difficult to say exactly how many of them are needed because, as with most other psychoactive plants, this varies from person to person.
From this point, we can say that standardized extracts give the best trip results, unlike fresh leaves, which certainly require massive amounts. However, when the effects are there, some fresh leaves can be used to extend them; up to 40-60 minutes instead of the usual 15-20.
When using a bong, 50-500 mg of dried leaves should be sufficient, according to Erowid. If you regularly smoke Salvia, at least 1 gram is required. Either way, don’t expect much more than a normal high – with this method.
When smoking Salvia it is important that the smoke is kept in the mouth as long as possible, so that the active substances can do their work. The same applies to chewing the leaves: chew them for a long time, because the active substances are absorbed into the body through the oral mucosa.
Warnings
Salvia divinorum is not known to be physically addictive or to cause psychological dependence. However, as with all substances, some people will use it more often than is actually pleasant. No tolerance to salvinorin A is possible, so the experience can be prolonged by smoking more of it.
-Do not use Salvia when weapons, knives or other dangerous objects are within reach.
-Do not participate in traffic if you have taken Salvia.
-Choose the time and place for the trip carefully. Privacy and security are very important. Be careful with heights and flammable objects, such as candles. Do not make phone calls, possibly call people back when you are sober again.
– Think carefully about how you take the Salvia and in what quantity.
-After smoking Salvia it is best to lie down, this feels safer and more pleasant than when you start to drift around. So stay down during the trip. Tripping with your eyes closed is also recommended.
– Have a sitter with you, someone who will make sure you don’t do crazy things and can reassure you if something goes wrong. (This is especially important if you are using Salvia for the first time, are taking a high dose, or a strong delivery system such as evaporation.
Also offer to be a sitter to others.
-If you have mental health problems, don’t take Salvia.
-Choose responsible use of Salvia and inform others accordingly. Do not give it to minors, violent or unstable persons or share it with strangers. Know who you are giving it to and why they want to use it.
-Never take Salvia at work or in public. Keep it private, Salvia is certainly not suitable for concerts, house parties and parties.
-Do not mix Salvia with alcohol. Avoid combinations with other drugs.
-Be extra careful with the evaporation of extracts, evaporated leaves and salvia leaves specially processed for smoking.
-Never use pure salvinorin unless you have an ultra accurate scale so you can weigh the dosage in micrograms and know exactly how much you can safely use. Even when this is possible, a sitter should be present.
Side Effects
As happens with the smoking of a lot of plant material, some salvia users suffer from throat and lung irritation afterwards. You may also be slightly irritable or have a headache after using it.