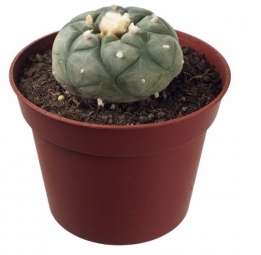 (Lophophora williamsii)
Peyote, also known as ‘the divine cactus’, for growing indoors. These cacti should be grown for a couple of years before they can be harvested.

Everything you need to know about Peyote!

Peyote is a slow growing cactus. But it’s quite easy to grow and to multiply them. You can start with seeds or a plant. Sprouts from a plant must be left dry for 15 days. It grows best on basic calcareous soils with a good drainage. Ph of 6 or 7. After placing it in a pot it only needs water, and when you put it in a new pot every year, fertilizer is not necessary.
Note that the small cactus at the start is prone to infections caused by fungi in the roots, when the drainage is not good. In this case uproot, apply fungicide, let it dry for some days and replant again.